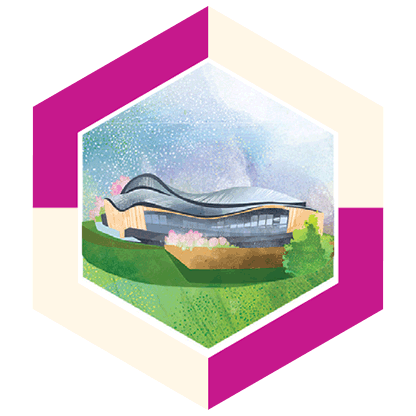 The Manggha Museum of Japanese Technology and Art was created in 1993–94 by Oscar-winning director Andrzej Wajda, who earmarked the Inamori-Kyoto prize he received in 1987 for the purpose, together with funds of the Kyoto–Kraków Foundation of Andrzeja Wajda and Krystyna Zachwatowicz. The building, a work of Arata Isozaki and Kraków architects Krzysztof Ingarden, Jacek Ewý and JET Atelier, is known as “the Japanese wave” for its waveform structure that brings to mind this far eastern country. Intended as the meeting place for traditions and cultures, it was made a branch of the National Museum in Kraków and was opened in 1994 by President Lech Wałęsa and Norihito, Prince Takamado. The Japonica collection includes over 15,000 objects presented to the National Museum by Feliks “Manggha” Jasieński in 1920. The Manggha Centre is active in modern arts, music, theatre, film, literature, philosophy, and the religions of Japan and the Far East. It also operates the Andrzej Wajda archive and a school of Japanese language. In 2015 the Europe – Far East Gallery opened next door to the Museum.