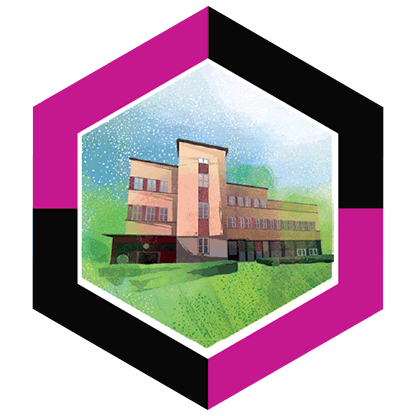 Community Centre in the Worker Housing Estate is a large building by the crossing of Praska and Pietrusińskiego streets, and the most important and distinctive building of the estate. It is also an example of the harnessing of architecture to solve community problems from the time between the world wars, when there were plenty of homeless and poor people in Poland. To address the situation, the Society for Worker Housing initiated the construction of cheap yet modern tenements, and thanks to an agreement with the authorities of Kraków, an estate of small flats was built for the poorest workers who could live here for half the average Kraków rent. Each of the houses built along ul. Praska in Dębniki had its own garden. The functionalist building of the Community Centre, designed by the Kraków architect Fryderyk Tadanier, was built nearby in 1937. After the Second World War it was a cinema, but is now home to a local culture centre, library, theatre, and the district authorities.