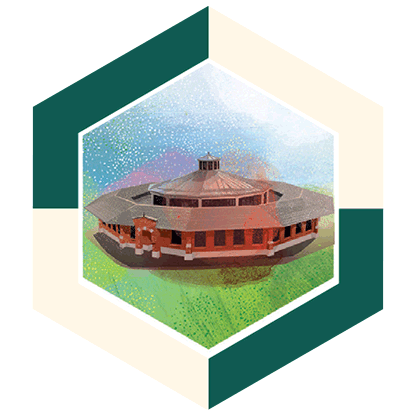 Square with the Okrąglak building. The centre of Kraków’s district of Kazimierz teems with locals and visitors alike. Some arrive here from afar to try the (allegedly) best zapiekanka open-face sandwiches in Poland. Should you not fancy that local delicacy, you can visit one of the many restaurants and pubs in this fashionable and upmarket district. The square has stalls that offer jewellery, knickknacks, vinyl, and books, and on Sundays you can find a whole new wardrobe here, as the place turns into a flea market. Officially called “new” – Nowy – locals call it Żydowski or “Jewish”. For a hundred years it has also been a fruit and vegetable market, a function it still performs. Since 1900, Plac Nowy has had a 12-sided covered market standing in its centre. As so many corners and sides make it nearly round, it’s called Okrąglak – “the round one”. Part of it was originally a kosher slaughterhouse for poultry, but during the war, the Germans liquidated it and locked the building down.