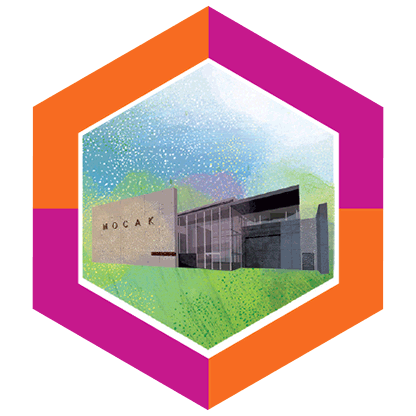 MOCAK and Oskar Schindler Enamel Factory – the two museums on ul. Lipowa in Zabłocie probably attract the most visitors to the right-bank Kraków. One presents the history of the city during the Second World War, and the other is one of the most active museums of contemporary art in Poland. Zabłocie was the most industrialised part of Podgórze and is where the Rekord First Małopolska Enamel and Metal Vessels Factory opened in 1937. It was taken over in November 1939 by the German industrialist Oskar Schindler, who developed it into Deutsche Emailwarenfabrik and employed around 1100 Kraków Jews from the nearby ghetto, thereby saving them from the Holocaust. Winner of seven Academy Awards, Stephen Spielberg’s Schindler’s List told their story and made the fact and place famous all over the world. After the war, the factory was part of the state-owned Telpod enterprise that operated here until the early 21st c. When the city took the premises over, a branch of the Kraków Museum opened in 2010 with a major multimedia exhibition on the history of Kraków in 1939–45 and a significant part devoted to Schindler’s efforts. The MOCAK Museum of Contemporary Art opened next door in a modern building designed by Claudio Nardi and Leonardo Maria Proli. It contains a large collection of Polish contemporary art. Its café and library, with its impressive collection, welcome visitors throughout the year.