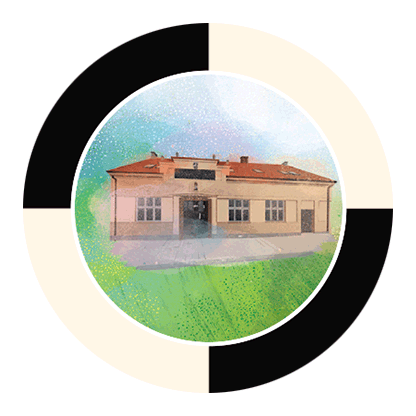 The Guild House of the Butchers and Sausage Makers in Piaski Wielkie. Piaski Wielkie was a medieval village included into Kraków in 1941. Locals ran slaughterhouses and made charcuterie which they sold in Kraków without a licence, as they never actually belonged to the guild. They earned themselves the name of kijaki piaszczańskie as they used long poles to carry chunks of meat and bacon, sausages, and hams. The restrictions were lifted in 1859 and sales skyrocketed, with the revenue helping to develop the district. Soon, a neo-Gothic slaughterhouse, church, school, and power station were built. In 1932–34, the Piaski Guild of Butchers and Charcutiers erected a building for assemblies and performances opposite the (now demolished) slaughterhouse. The large single-storey building has a cow’s head over its gate: the symbol of the local guild. The tradition is very much alive, and in 2017 Kiełbasa Piaszczańska sausage was granted PGI (Protected Geographical Indication) status by the European Commission.