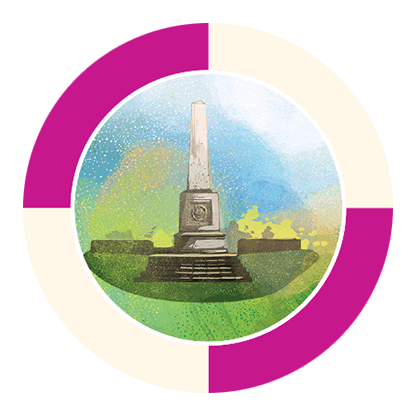 Obelisk on Kaim Hill on the border of Bieżanów district and Wieliczka. The characteristic monument commemorates the battle fought during the First World War in 1914 by the defending Austro-Hungarian army against the attacking army of the tsar. After the outbreak of the war, the Russians quickly captured eastern and central Galicia. Their advance was only stopped on the Carpathian Arch and in the approaches to Kraków. The forts of the Kraków Fortress withstood the onslaught and Kaim Hill, where the battle raged, was the farthest the tsar’s army reached. Soon, the Austrians regained the initiative and recaptured most of Galicia. The obelisk was unveiled a year later and decorated with the coats of arms of Hungary and the Austrian Habsburgs. The terse inscription in Polish and German pays homage to 3000 victims of the fight for Kraków in December 1914.