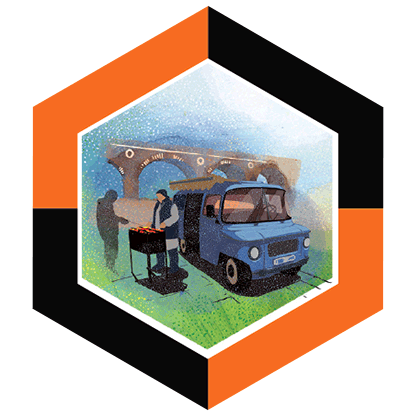 The Covered Market and the Railway Bridge. The massive five-span railway bridge was built for the Galician Railway of Archduke Charles Louis over the old Vistula river bed in 1861–63, and has allowed trains to connect Kraków to the east and south for 150 years. Merchants had opened their stalls in the square on the eastern side of the bridge for centuries but, to organise the trading better, the city authorities decided to build a municipal covered market – Hala Targowa. The modern functionalist building was only completed under the Nazi occupation in 1940 and today it operates as a grocery. The adjacent open market is one of the many markets where fresh fruit and vegetables, bread, milk products, eggs, and flowers are sold. Each Sunday morning it turns into a huge flea market and in the evenings (except on Sundays) you can find the legendary Sausages from the Blue Van (Kiełbaski z Niebieskiej Nyski) sold here until the small hours.